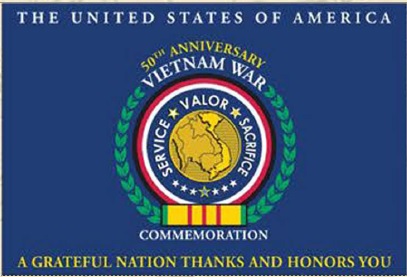 The Quilts of Valor Foundation has partnered with the Vietnam War Commemoration Program.  The program was created through the 2008 National Defense Authorization Act to honor all those who served during the Vietnam War.  By presidential proclamations on May 25, 2012, and November 20, 2017, the Commemoration extends from Memorial Day 2012 through Veterans Day 2025. Congress articulated five objectives for this Commemoration:

According to the Department of Veterans Affairs, 9 million Americans served on active duty in the U.S. Armed Forces during the period of the Vietnam War; approximately 6 million are living in America and abroad today. Many of us have awarded Quilts of Valor to these Veterans.

The program has a protocol for recognizing the service of these Veterans with a lapel pin.  Our partnership is designed to help reach the 6 million, thank them and pin them.  Both the award of our QOV and the presentation of the pin are solemn events.  To ensure the goal of both Missions are met, we have a written Vietnam Lapel Pin SOP available on the member dashboard.  The SOP outlines how you can order pins and supporting documentation given to the recipient and how to do the both the award of the quilt and pinning ceremony to these Veterans.  For more information about the pin, please read the Lapel Pin Fact Sheet.

We’re very excited about this partnership.  Any questions can be directed to me at donna.brookings@qovf.org.  We hope you take advantage of this opportunity to help our government say, “Welcome home” to our Vietnam Veterans.